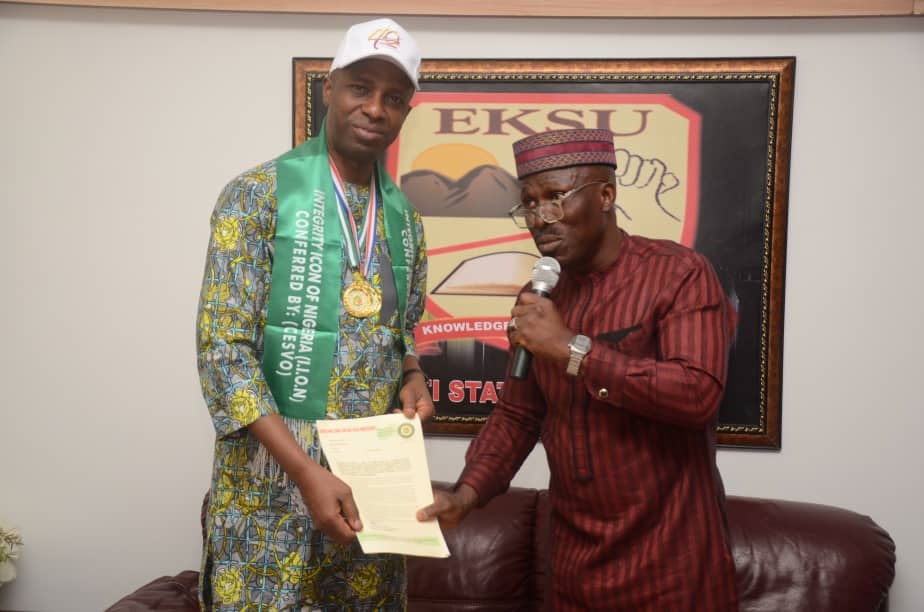 The Center for Ethics and Self Value Orientation of Nigeria (CESVO), the largest anti-corruption body in Nigeria has honoured the Vice Chancellor, Ekiti State University, Professor Edward Olanipekun with a gold medal of University Administrator of Nigeria, Integrity Icon of Nigeria (IION) and a Certificate of Excellence in Ethical Leadership award that are exclusively reserved for incorruptible public servants in Nigeria.

At the presentation of the award which was held in the Vice Chancellor’s office, the Executive Director of the Organization, Prince Salih Musa Yakubu, explained that the body is an Abuja based international organization committed to exposing corruption and promoting excellence in the public service sector. He said further that it had spread to the 774 Local Government Areas of Nigeria, adding that CESVO is also  committed to monitoring integrity, selfless service, commitment to quality assurance, self discipline and ethical uprightness in all work places in Nigeria.

The organization also named Ekiti State University, Ado Ekiti, as the first university among the South West Universities and second among the top 10 with highest ethically responsible universities in Nigeria.

Prince Yakubu described the Vice Chancellor as a man of integrity who “has been secretly investigated and confirmed as an upright public servant with sound ethical value”.

The Executive Director promised that CESVO would later engage the staff and students of the university in series of training very soon.

Other principal officers of the University were  also given Certificates of Ethics Compliance.