The Philosophy Of The University

The University system the world over and within the last millennium has come to be seen as a “community of scholars, seat of learning, centre of liberal education, mother of the professions, agent of national or regional development, vehicle for the propagation of teaching, advancement of knowledge through research and provision of service to society”.  Pursuing these missions in varying degrees of mix, EKSU has chosen as its philosophy and purpose, a development objective.

A “Development University” is meant one that sets itself the mission of providing all the functions that an institution of higher learning can, in a developmental process throughout a defined constituency.  At the centre of its work towards regional development are the tasks of identifying and resolving developmental problems.  To be effective, these problem solving functions require appropriate structuring of academic activities and resources in that even where it is concerned with practical techniques, it imparts them on a plane of generality that makes possible their application to the situation.

An implication of the foregoing is that the influence of the University must be felt not merely in the immediate vicinity of its campus or campuses, but throughout the State. These considerations carry the conventional international objectives of a University forward into the developmental orbit. It is therefore our hope that graduates of this University will not only acquire education in its broadest sense but our philosophy and policies will inculcate in them the spirit of self-actualization in line with the national aspiration for genuine development. 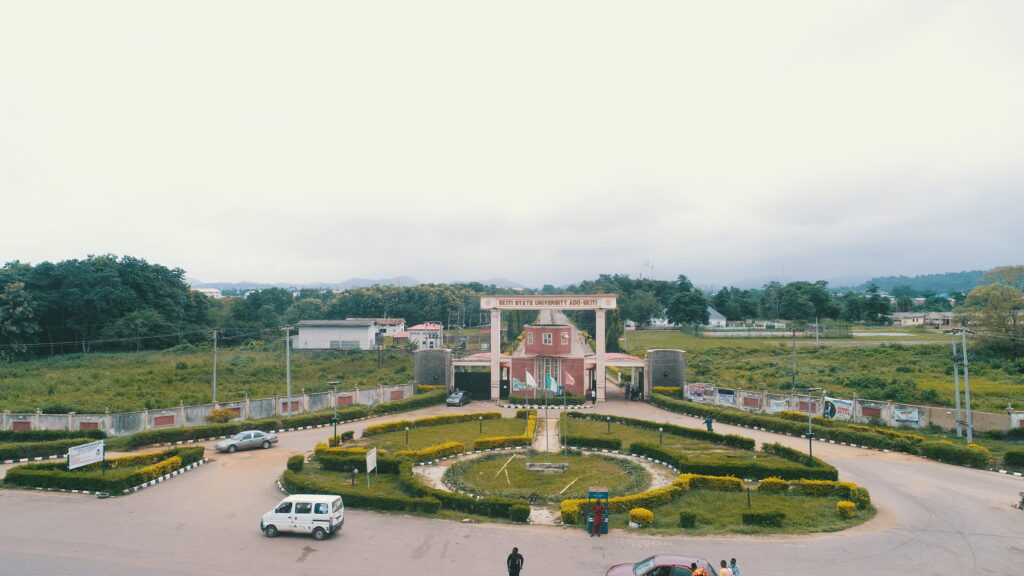 * Academic integrity
* Accountability
* Caring for the well-being of staff and students
* Fairness in all relationship with staff and students, irrespective of age and gender
* High standards of personal honesty and ethical behaviour
* Openness and shared governance
* Confidentiality in handling all official information
* Pursuit of excellence in teaching, research and services
* Respect for tradition and culture
* Probity in judgement and action

Creation And Early History Of The University

The hint for creation of the University came during 1979 Nigeria general elections, when a gubernatorial candidate for Ondo State, Chief M. A. Ajasin made the university creation one of his campaign promises.

The terms of reference of the committee were as follows:

Highlights of the Consultative Committee report to the State Government on 16th July, 1981 are:

The Government then set up another committee headed by Prof. S.A. Akintoye to review the reports of Akinkugbe Committee, the outcome which formed the basis of the Government’s White Paper for the establishment of the University.

The University Council held its 1st meeting at Ado Ekiti on 30th and 31st March, 1982 and resolved, among others, that 30th March of every year be declared the University foundation day. During the 1st, 2nd and 3rd meetings of Council, the University was able to:

2.    Review and implement the University blueprint

3.    Set the tone for policy formulation and implementation in the University

6.   See to the early commencement of construction work of the mini-campus after the 1st foundation day anniversary in 1983.

In August, 1984, Chief B.A. Ajayi resigned as Chairman of Council, paving way for formal dissolution of the 1st University Council and the appointment of a new one headed by Professor J. Ade Ajayi as Pro-Chancellor and Chairman.

The Council headed by Professor J. Ade Ajayi was in office from August 1984 to March 1988. During the period, the University was able to:

2.    Saw to the movement of the University from its temporary sites to the permanent site on Ado-Iworoko road in August 1985.

3.    Adopt the motto “For Service and Integrity” and approve a revised University logo

4.    Change its abbreviated University name from ‘OAU’ to ‘OSUA’.

5.    Appointed Professor A. Fajana as the 1st Deputy Vice-Chancellor for a term of two years

7.    Approved a career structure for teachers in the University Staff School.

The 2nd Council was dissolved on 31st March, 1988 and the 3rd Council constituted in October, 1988 with Chief Augustus Adebayo as Chairman. On March 31, 1990, the tenure of Prof. I. O. Oladapo as pioneer Vice-Chancellor of the University came to end after eight years having given stock of his stewardship at the 4th convocation ceremony of the University held on Friday, February 23, 1990. The successful completion of the terms of Prof. Oladapo led to the appointment of Prof. Peter Oluwanbe Bodunrin as his successor and 2nd Vice Chancellor of the University. He assumed duties on 1st April, 1990. During his tenure, the University witnessed:

2.    At the 10th Foundation Anniversary on Monday, 30th March, 1992, HRM Oba Festus Ibidapo Adesanoye (The Osemawe of Ondo) was installed as the 1st Chancellor of the University at a ceremony witnessed by the State Governor, Evangelist Bamidele Olumilua.

4.    In September, 1992, another Deputy Vice Chancellor, Professor I. O. Orubuloye, was appointed.

With the vacation of the office of Vice Chancellor by Prof. Ibukun, the Ekiti State Government took over full proprietorship of the University and approved the appointment of Prof. Olutuyi Ashaolu as the Acting Vice-Chancellor. Prof. Asaolu later handed over the mantle of leadership to Prof. Akin Oyebode (a Professor of International Law) as the substantive Vice-Chancellor at the commencement of 1999/2000 academic session.

During the period of Prof. Akin Oyebode, University administration was able to achieve the following:

4.    Increased University cut-off point above national average to improve the quality of the University entrants

5.    Improved and constructed physical structures such as 4 in 1 Lecture Theatre, ETF Hall Construction and 1st University gate among others

9.    Positive image laundering of the University in the public

10.   Commitment to academic excellence with new work ethics for all staff for better performance

11.    Confrontation of social vices in the University community

Prof. Akin Oyebode memorable tenure as Vice-Chancellor ended in May 2003 and Prof. (Mrs.) Olufunke Agbeke Egunjobi (A Professor of Zoology) was named the Acting Vice-Chancellor, having served as the Deputy Vice-Chancellor under Prof. Oyebode. The 1st Visitation Panel to the University was appointed by the State Government during the tenure of Prof. Oyebode.

In 2004, Prof. I.O. Orubuloye took office as Vice Chancellor while Chief Akin Omoboriowo became the Pro-Chancellor and Chairman of the Governing Council. Prof. Orubuloye served in the capacity until 2008. It was a period that saw that the University:

Prof. Peter Adeniyi (former Vice Chancellor of Federal University of Technology, Akure and a renowned Geographer) became the Pro-Chancellor and Chairman of Council in year 2008, while Prof. Dipo Kolawole assumed of office as substantive Vice Chancellor of the University. Professor Kolawole introduced the spirit of TEAM UNAD, a consultative and management wide approach to University policy making and administration. This has resulted to tremendous changes in the University management and invariably resulted within the past year in the:

1.    Conscientious lifting up of the University image in public forum and functions
2.    Creation and involvement of extended Management in policy making and University administration
3.    Reintroduction of the University College of Medicine and appointment of Prof. G.F. Esan as the Provost of the College
4.    Adoption and implementation of new University Law
5.    Streamlining of academic procedures and quick processing of results and graduating list
6.    Streamlining of academic records and prompt production of certificates and academic transcripts
7.    Conference marking of semester results and quick compilation and computation for Senate approval
8.    Construction and effective maintenance of University buildings and renovation of old ones
9.    Construction and equipping of New buildings in the University such as Shell ICT Centre, Part time Degree Programme Complex, Alumni funded Faculty of Law Moot Court, New Faculty of Engineering Complex, New Faculty Buildings for the Social Sciences, New University Lecture Theatres and New University gate
10.    Improvement of the University landscape and construction of new road networks funded by the State Government
11.    Implementation of the Visitation Panel’s report
12.    Commitment to academic excellence including punctuality and prompt action to work ethics by all academic and non-academic staff for optimal result and better performance
13.    Commitment to staff welfare and development through research grants and journal publications, prompt payment of salaries, social engineering among staff unions and the creation of Staff Club to mention a few.
14.    Employment of new sets of well qualified academic staff
15.    Improved Library services through acquisition of new books and virtual library
16.    Introduction and deployment of new University website and other Federal Ministry of Education computer facilities for the University
17.    Confrontation of all social vices in the University community
18.    Auditing of Students in the University and expulsion of illegal students from the University community
19.    Proper handling of disciplinary cases of insubordinate and unruly staff and the termination of their appointment from the University
20.    Improved University admission rating through monitoring of the quality of the University entrants and screening of legitimate students